So I know im late and there are a few good reason’s for that. I wont get into my personal life but I was released from my Job 2 Thursday’s ago and have been dealing with dealing with the transition from employed to unemployed, as well as spending a lot of time to finding a new job.

Onto the good stuff though… Got 2 pretty major things worked on, 1 is the location for the J 1772 charger as well as the design and start of fabrication on the battery box holder.

This is going to be mounted next to the meanwell’s in the tail, which I am still trying to figure out how im going to mount them, I might just end up cutting a giant hole in the middle and mounting them with Aluminum and letting them Air Breath as they are waterproof… Im thinking that I will add a standard NEMA C-13 Receptacle above it. But for right now that is still up in the air. 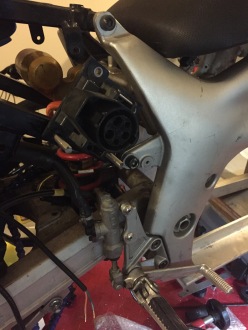 I still need to put the flip cover for the J1772 back in place, but first need to finish making custom bolts for them to hold them to the frame.

So i started with all good things and modeled it up, and it looks like it will fit nicely with 12 cell’s 🙂 (ignore the skew on in the stack of three i had to just move it out the way for a second) so the whole thing is made up of 4 bar’s (2 upright and 2 horizontal). All the bars are right angel 6061 but that’s where the similarities end. The uprights are pretty much going to stay the way they are, they are 1 1/2 x 1 1/2 x 1/4 and will have just a slight notch cut in the top to help them hug the frame. the horizontal are 1 1/2 x 2 1/2 x 1/4 and will have a chuck cut out to allow the 3rd battery in the first stack and the 3rd-9th battery in the second stack to drop closer to the other’s sandwiching them in place. The plates provided from Hybrid Auto Center will go in the center (plate,aluminum,plate) and also on the outside edge’s. I have asked them to send me an additional 4 to make sure that I have them all covered 🙂
I will end up putting spacer’s in between the upright’s and the horizontal with probably a full length bolt.

Here is the Horizontal bar, the upright section will be cut out and shaved flat to match with the horizontal section. I will also drill the holes in it to match the battery and allow me to run the threaded rod all the way through and then will bolt them off top and bottom.

So I made this and then ended up flipping it so the big bar is untouched and facing the front of the bike. reason for this is i needed the clearance so that i can swing the arms back about 5°

These are a bunch of misc pics that I felt were important to add just for documentation purpose’s. I also completed the Regen Mod for the “clutch” lever to allow me to create a 5V signal and run it to the controller, still need’s some fine tuning in terms of squishy-ness but that can be dealt with later. 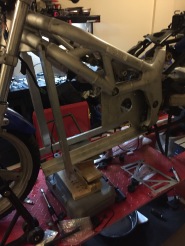 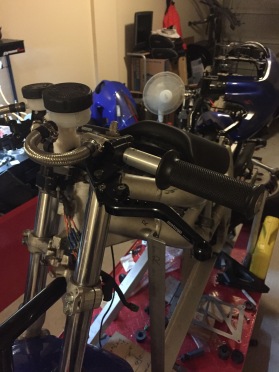 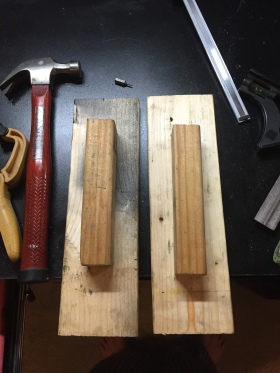