Well i started working on the fab plate this weekend, ended up getting 3 version’s out of the piece of aluminum I have.

Started working on it, and  realized i have the first set of holes, about 2 inches too low, so i flipped it over, and started on Version 2…

Moved the mounting holes up, drilled them all out, and started working on the mount hole for the motor, didn’t realized i had mounted it too low on the plate (and as such if i had gone to mount it on the bike, it would have not worked due to the fact it was so low). well i also realized that the drill press didn’t have enough of a throat to allow me to drill out the rest of the holes for the main hole, hence why it looks like there is a cut off line, so onto version 3…

Well I moved it all above the imaginary line that I had drawn with the lack of reach of the drill press. So i made a line out of it and made that the bottom of the new holder which moved the hole for the motor mount up 4 inches and moved it closer to be inline with the location of the previous ice engine. 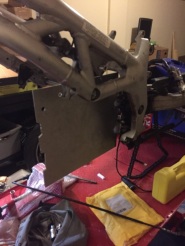 Version 1 mounted up on the bike

side view showing the hole that was cute 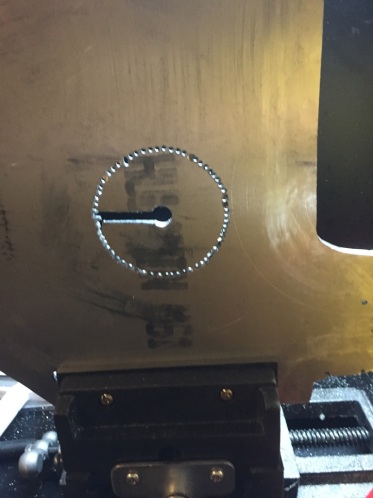 It was all going great till all of a sudden SNAPPPP, broke the last jigsaw blade that i had. So cutting it on hold till probably this weekend when i can get a new set of blades and finish working on cutting it. and then i will work on filling it down and making it smooth, im following the way that Rob on the elmoto.net forum did his. (http://www.perceptive-research.com/emoto/motor.html)

As a side note, my SV1000 Gas tank arrived last week, and as soon as I find my dremel i will work on cutting the bottom of it away. Im still waiting on my Dominio throttle to get here. I will start work on the hand bar’s and getting them all mounted and wired up. Well till next time 🙂